Common Causes of a Power Surge

A power outage for even a few minutes leaves us irritated, doesn’t it?

Indeed, life without electricity is unfathomable; then imagine what it would be like if all the appliances and electronic devices at home cease to work. Obviously, no one would want that in their worst dreams.

But hazards such as a power surge, which is a sudden spike in the voltage through a power line, can give rise to such situations. So, to prevent this possibility, it’s important to develop a clear understanding of the issue and take adequate precautionary steps.

And that’s exactly what our guide will be all about. We’ll be discussing the common causes of a power surge and then take a brief look at how its damaging effects can be prevented.

Without further ado, let’s get straight to the point. 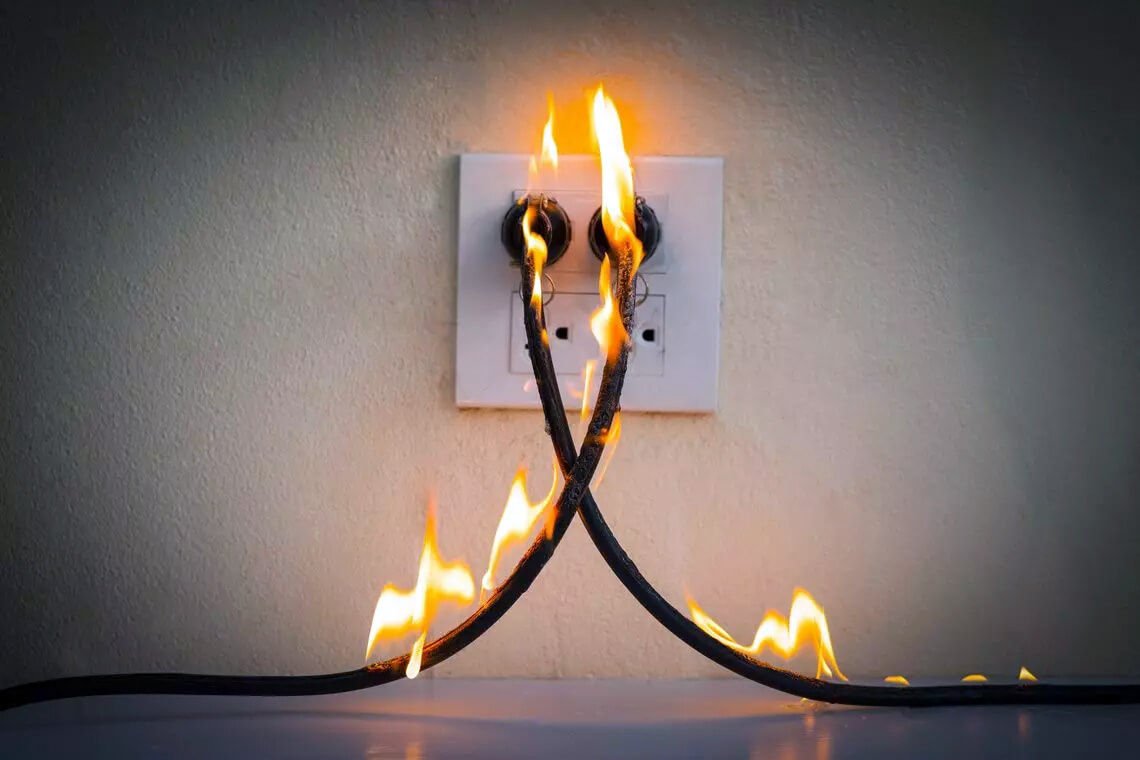 A good wiring system is a key factor in ensuring that electricity is distributed efficiently throughout the home. As such, if a part of the wiring gets damaged or if the casing becomes exposed, that would increase the likelihood of a power surge.

Note that exposed or damaged wiring offers much less electrical resistance, and conductive material can raise the current to a dangerous level. Now, it’s difficult to know the condition of your wiring if you don’t get behind the drywall, which is why we’ve listed some signs that indicate a fault in the wiring.

If you spot any of the above signs, you should contact an electrical repair and maintenance service immediately.

An electrical overload occurs when you try to draw excessive power from one circuit. This may take place if you overuse an extension cord, use an electric appliance above the amperage levels of the circuit, or plugin a lot of appliances.

This may give rise to a power surge as the circuit overwhelmed with excessive power might receive an abrupt current spike. If you’re suspecting such a problem, getting all the outlets at home checked by an electrician will be the best way out. On a side note, you should ensure that too many appliances are not being used in the same room as that is a very common cause of a circuit overload, and in turn, a power surge.

Appliances or machines which need high electrical power to operate, such as air conditioners and refrigerators, may cause power surges or spikes in energy usage. When these devices start working, they might tend to use huge amounts of electricity, which may be transmitted throughout the circuit and overpower other electronics and appliances in the path.

If this occurs in your home, you might notice the lights blinking or flickering.

If lightning touches down near a power line at your home, it may lead to an electrical voltage spike by many million volts. Your computer, cable box, or lamp is not likely to survive after power surges taking place due to lightning strikes.

This would require you to shell out your valuable money on the repair or replacement of such devices and is also a major hassle. And for businesses, it can have even more critical consequences as there might be a loss of data.

Therefore, the best precaution to take when there’s a severe storm is powering off and unplugging any expensive electrical appliance or equipment.

Older homes face greater risks of power surges due to the presence of outdated electrical power transmission systems. Many of these homes also have aluminium wiring, which offers lesser stability and efficiency than the standard copper wiring in modern houses. As such, the former is more prone to loosening and may ultimately cause power surges.

Though the idea of power outages causing power surges may seem unusual, this does happen sometimes.

You might’ve noticed how all the lights at your home shine very brightly for a moment just after a power outage or blackout. This massive energy burst bringing the power back for an entire area or town can cause excess energy to course through the power supply lines.

Car accidents and tree limbs may often take down the electric power lines in an area, which would lead to power outages. Plus, animals such as birds, snakes, and squirrels can interfere with power lines by climbing onto transformers, causing the power service to be knocked out.

After such hazards, when the power company switches the power grids to restore the power supply, an electrical system may be flooded with power. This can naturally cause power surges.

How To Stay Protected From A Power Surge?

Power surges can occur anytime, which is why you must adopt measures to prevent your electronic devices or appliances from getting damaged due to these hazards. The most efficient measure in this regard is a superior-grade surge protector. It works to divert extra electricity into the grounding wire of the power outlets in case the voltage exceeds the acceptable limit.

Now, you can find surge protection devices of various levels on the market meant for protecting different parts of an electrical system. Let’s have a brief look at each of these devices:

Such a power strip contains multiple power outlets and can either be mounted on the wall or kept on the floor. Hard-wired into the electrical system of your home, this strip provides protection to all the devices plugged into it by diverting voltage surges efficiently. Notably, while purchasing such a device, you must check for the surge protector label on it.

Such devices are installed at the main electrical panel to divert any external power fluctuation to the ground. These can also be used together with other devices for surge protection.

Working in a similar fashion as power strips, these can be plugged directly into any standard outlet on all. Besides providing adequate protection, these are more space-saving than traditional surge-protecting power strips.

These are useful in providing instant backup power to a connected appliance or device during a power outage. A wall outlet constantly charges the battery using this device instead of directly powering the appliances, which ultimately isolates them from power surges.

Keeping You Safe From Power Surges

To shield your home from the damaging effects of power surges, it’s essential to be proactive. So, contact a reliable company offering electrical installation services near your home to get a surge protection device installed as soon as possible.

Keep in mind that installing the ideal type of surge protector is important to ensure that it’s able to work efficiently; so don’t forget to talk it over with them. For determining the type suitable for your home, you can also refer to the section where we have discussed the functioning of these devices.

With that, we’ll sign off for today. Till next time, take care!